V-Hunter Puzzler Dx is a grid turn-based action puzzler game where you need to slay all the monsters in a level to progress. Each monster has different attack and movement patterns to do its best to stop V-Hunter. Help V-Hunter rid the world of monsters and vampires!

Use the arrow keys or WASD to move V-Hunter.  Press the spacebar to wait in place. Press R to restart a level.

Every player's action is a turn. Enemies take an action every several turns, dependent on the type. The player will always act first in a turn.

To attack an enemy move towards them when in an adjacent grid.

Move over items to pick them up.

The game will save your progress at the start of each level, so it's easy to always come back!

When enemies die, they leave behind a blood splat. Be careful, as they are dangerous to V-Hunter. However, sometimes you may need to step over them to beat a level.

The Rat is the most basic enemy. It never moves but will attack every three turns.

The Skeleton patrols every two turns. It can patrol horizontally or vertically and will attack if the player is adjacent before it patrols.

The Vampire attacks every three turns. It does not move but it has extreme range, so ensure to not be in its' path when it attacks.

The Potion gives the player one additional heart. While sometimes this helps you survive combat with monsters, other times it's necessary to save the potions so you can traverse through blood splats.

The Holy Water needs to be picked up in order to kill Vampires. Make sure you do before attacking them!

Extract the zip file and double-click the exe. Make sure the .pck file is in the same folder as the exe. 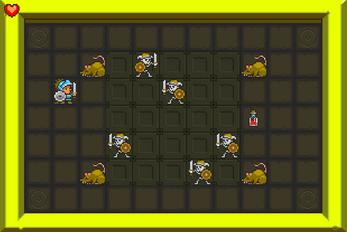 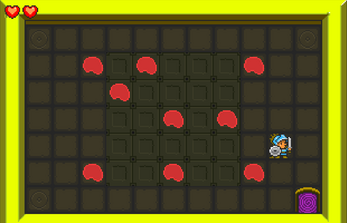